View the introductory video produced for the forum MoVIng Forward 2015: 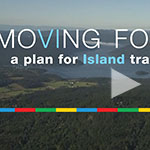 The 2015 Transportation Forum brought great minds together to discuss issues and share solutions for how to best move people and goods to and around Vancouver Island.

Further events will be planned for future dates – please see below for a list of upcoming related events, and read on for a Press Release following our initial forum, March 2015.

“There’s a perceived disconnect between our Island and the rest of North America. There’s also a tendency to see the Strait of Georgia as a barrier but there’s an opportunity to see that as a connector,” said George Hanson, president of the Vancouver Island Economic Alliance.

Representatives from organizations such as Greater Victoria Harbour Authority, Tourism Victoria and B.C. Ferries will all propose solutions to critical issues such as getting people, goods and materials to and around Vancouver Island.

“An increase in shipping containers to promote more trade with Asia, an airport initiative to make it more reliable and changes proposed to upgrade ferry terminals,” said Hanson. Those are just a few of the proposed ideas.

Al Hasham, CEO of Maximum Express and Max Furniture as well as Greater Victoria Chamber of Commerce vice-chair, has personally been affected by this problem.

“B.C. Ferries is the main topic right now. They’ve been increasing [rates] since I went into business in 1987,” said Hasham.

Hasham says that when rates for shipping costs go up, so does his.

“Rising cost of B.C. Ferries affects my business and my customers. It just keeps going up and up.”

The idea of the forum is to try and jumpstart some of these ideas for improvement.

“The forum is all about bringing interested people and stakeholders up to speed to help move some of these projects forward,” said Hanson.

Back to Top
Did you find what you're looking for?
YES
NO
We're glad to hear it! If you need anything please email us or give us a call at 250-667-5225.
We'd love to help! Let us know what you are looking for and our team will be in touch soon!